My trip to the national mall yesterday to see several of my favorite authors was better than I expected in some ways, but worse in others. I saw four of the authors I planned on seeing, but missed most of the talk of one of them because my daughter was boredtiredcoldandfeelingsick and wanted to leave. Since the festival was sharing the National Mall with a large peace demonstration, it was much more crowded than in previous years.

It was a amazing to see John Irving. I'm not sure I'd ever seen him interviewed at all before, although did read the interview he gave for Pages magazine about his newest book that I am listening to on CD. I've loved Irving's writing since the late 1970's when I read The World According to Garp before seeing the movie. After reading that, I read all of his books, and immediately devoured each new one as it was published. I've only missed out on reading a few of his books. I lost interest in his style of writing for a few years, but began reading him again with Widow For One Year. It was a pure pleasure being under the same roof (OK, tent roof) as Irving.

I really should learn that obsessions are not contagious and should not try to drag others into them. My daughter loves to read but she cares little about seeing the authors who write the books she loves. And she cares even less sitting through book talks by authors she has not read. Combine that with being hungry and tired in a very crowded place and you have a slightly sullen teenager. She was funny about it though. She refused to try to push through the mass of people while I was listening to John Irving's interview and suggested I leave my semi-prime location to stand outside with her. She text messaged me several pleas, finally stating that she was tired, hungry, cold and "about to be trampled by peace ppl". Luckily that was at the end of the interview and we both found seats for the next author, Neil Gaiman.

I first heard of Neil Gaiman during my volunteer orientation for last year's book festival but since the name was unfamiliar to me, it didn't stick. At the festival itself, my daughter saw a book in the sales tent that she had heard of and wanted to buy. The book was called Coraline, but she didn't know the author. A few weeks later, at a book store, we tried to find Coraline, but it had been sold out at that store. The sales clerk wrote the name of the book and author, Neil Gaiman, on a sticky note. At Christmastime Clare put the book on her wish list. We were able to get the recording on CD for our drive to Illinois, and we all thought it a wonderful story and well read by the author himself. Since then I have been reading Gaiman's online journal and looking forward to his book tour so I could see him for myself.

Gaiman looked thinner and frizzier than I expected him to look. He seemed tired as well, but having read his latest journal entry it was understandable. He commented on the helicopters overhead and once stopped talking to make a remark about a very loud protester outside the the fiction and fantasy tent. "He's not going to make many friends that way." He also tasked a question asker with finding the answer to her own question regarding "hair mayonnaise" and posting it to the FAQ part of his web site. As excited as I was to see Gaiman, I was left feeling let down. Must be the day after Christmas phenomena.

After eating a lunch of pasta salad, vegetarian pita sandwich, cheese pizza, apple and free water, Clare was less interested in hearing authors talk than before. She began to complain in earnest. We decided to sit in the Teens and Children's tent to hear the author. Walter Dean Meyers, before Sharon Creech. It was good we did because the rain began just as we sat down. I was glad to see that author since Creech used him as a character in one of her books.

Dean and Andrew arrived (noisily and distractingly) during Mr. Meyers' talk. Clare decided to go to a museum with Dean while Andrew loyally sat with me. We got a front row seat (albeit on the ground) for Sharon Creech's talk. The highlight of my day was when she was being introduced. I must have had a big grin on my face because as she looked out at the audience, grinning herself, her smiling eyes met and held my eyes, and her grin widened. A small connection, but one that I'll remember for a long time. She was entertaining in her presentation, calling children from the audience to play out scenes in her latest novel for kids, Replay. The only disappointment was that she said she had a wrist injury. She said she had a wrist injury two years ago too when I was helping out with the signing lines. Perhaps she has a chronic injury and can only sign one book per person, but I briefly wondered if she made it up both times.

Andrew was hungry so we headed over to the food area where he got in a very long line for a piece of over-priced pizza. I ran over to the Children's tent to see Phyllis Reynolds Naylor, but was interrupted by a text message and then a phone call from Clare who claimed we had a deal to leave at 3:30, even if it meant I could not finish listening to Ms Naylor. While I would have liked to hear what she had to say, I was fine with leaving. I'd spent an afternoon with Phyllis Reynolds Naylor when she visited my daughter's school. I got to sit near her, help her with the autographing (I got to be Shiloh that day, stamping his pawprint in the books she autographed) and talk to her about writing. I think I she was pleasantly surprised when I told her I read and enjoyed her adult novel. I sort of tired of Ms Naylor after reading some of the Alice books and being uncomfortable about some of the material in them.

The trip home was uneventful except for one line overheard on the metro. A still psyched up middle-aged protester asked a young man what language he was speaking. He replied that he was speaking Russian. They discussed his visit to the US and she remarked that "we had a pretty good meeting down there today" to which he smiled and pointed at the anti-war slogan on her t-shirt. He then asked when the big protest was taking place. She looked taken aback and said that it was today. He smiled, shook his head and asked again. "But when is the big protest?" He got on the metro at the same stop we did so I am surprised he didn't see the throngs of protesters. Or perhaps he was joking with her. I thought it was kind of funny.

Clare seemed to feel guilty for dragging me away from the last speaker and was very chatty on the way home.

Below are a few photos I shot with my sidekick. They are all very low resolution. 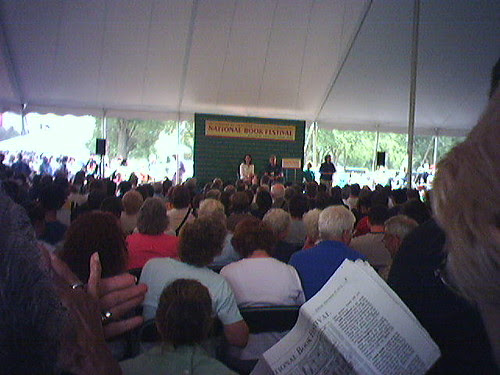 The tiny speck on the right of the stage is John Irving. (the seated one) 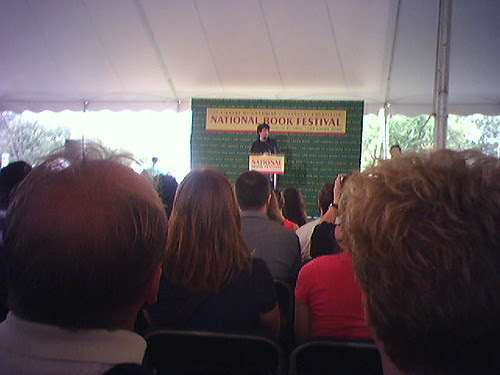 This is Neil Gaiman. I think he forgot to use his hair mayonaise. 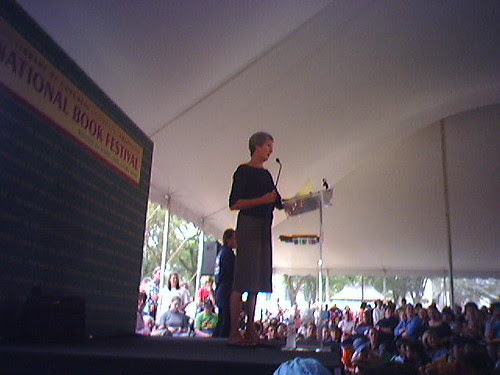 Here is Sharon Creech getting ready to call up audience members to play out some
scenes from one of her books.
Posted by Cedar Waxwing on Sunday, September 25, 2005