In December 1949 my grandfather, along with several other members of the Loyal Order of the Moose, Lodge 797* broke ground for a new Moose building in Elgin, Illinois. 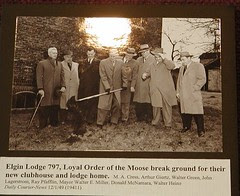 My grandfather is the third from the left in this photo. He was active in the Moose Lodge and was governor for one term.

This photo hangs in the Elgin Area Historical Society Museum in the "Old Main" building formally owned by Elgin Academy in Elgin, Illinois.

Many of my relatives and friends of the family have been active Moose members including my Uncle Donald Youngs and my father, Elvin Patrick.

I'm not sure exactly when, but many years ago the Moose in Elgin bought land on the West side of Elgin for a new building. I discovered recently that two friends of my parents, Larry Stone and Jack Pasholk were instrumental in the purchase of that land and in starting the dream of the new building on McLean Blvd.

While I never considered joining the Moose Lodge - their policies went against my liberal ethics - my personal history does include the Moose. As a young child my parents would take me to the Christmas event held in the upper floor. We often went to the Moose for fish fry when I was growing up. I even worked there one summer serving serving drinks for Saturday dances.

I have fond memories of being at the Elgin Moose Lodge with my grandfather and uncle. One of the most vivid of my memories is the inside front door. Where a member would insert his membership card in the keyslot which caused a loud "zzzzzzzzzzzzzzzzzzz!" and the door would open. 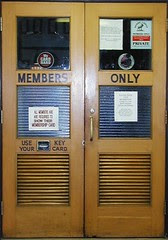 My grandfather and uncle sometimes let me put the card in the slot.

Another memory were the many moose heads hanging on the walls of the lodge. They hang there today, looking about the same as they did in the 1960's and 1970's.

I recently read that the city of Elgin was not interested in buying the old Moose building (I thought I read this on the Elginite's Blog, but I cannot find it to link to it). This was my first indication that the lodge was ready to build on the McLean Blvd site. Then, as luck would have it, when I was visiting my parents the week before last, my mom told me that they were going to be breaking ground for the new lodge while I was in town.

I couldn't pass up an opportunity to continue a small bit of personal history, so I dragged my husband and teenagers to the ceremony. My son pointed out later that I'd repeated "My grandfather was at the first groundbreaking ceremony and I want to be at this one." I guess it got kind of old for him. 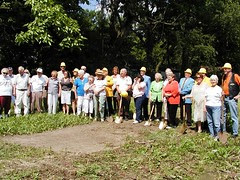 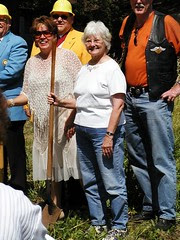 My husband wondered afterwards why I wanted to record the ceremony. He knew my feelings about the Moose were not favoriable. Maybe in a few weeks I'll look back and wonder why I attended this event. Or maybe not. Family history is important to me. It has come full-circle and that's a good thing.

Message in a Bottle...

This story, that came through my email box this morning as a Google Alert, made me smile. It seems that a couple, Erik and Nicole Landrowski of Elgin, Illinois, tossed a bottle with a message in it before their wedding ceremony on Grand Cayman Island. The message, dated May 2004, included contact information.

Fast forward to July 2006. On a beach in Devon, England another couple, Martin and Ruth Staddon, found the same bottle and read the message.

The article says that they are going to reply to the message, but it did not indicate whether or not the Landrowskis replied yet.

In this day and age of email, IM and fax communication, it is almost like a fairy tale to see that two couples have connected in such an unusual (and slow) manner.

It is especially sweet for me, having had my own British connections in the days before the World Wide Web's instant messaging (but after the message in the bottle days). In mid and late 1970's, before the Internet, there were weekly letters going back and forth from Elgin, Illinois to England.

I hope the Staddons and Landrowskis connect - and not just once or twice through email. Elgin and England are due for another "across the pond" friendship.
Posted by Cedar Waxwing on Thursday, July 06, 2006 No comments: