Several years ago when my husband, Dean, expressed dismay at the development of a large farm in Montgomery County Maryland, up-county from where we live, I recall thinking, perhaps aloud, "Why do you care? It's not that you ever lived there or anything". That brief memory has come back to haunt me as I watch, albeit from afar, with my own dismay as the very farms where my husband grew up are slated for redevelopment.

In the early 1950s, Dean's parents, Ruth and Willis moved their growing family from a small house in Pingree Grove, Illinois to a large farmhouse in Udina, Illinois. 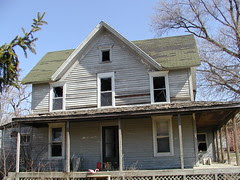 From there they moved, in the 1960's, to another farm on Plank Road. Ruth and Willis moved to the house where Ruth and her son, David, now live on Route 20, just across a field from their Plank Road house. 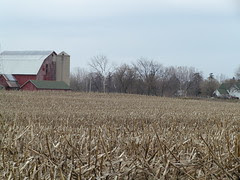 Dean's brother, Danny and his family now live in the Plank Road farmhouse.

When Dean and I first began dating in the early 1980s, one of the first things he did was show me the farms where he had lived. He was, and is, proud to have been a farmer's son. When we visit Illinois, which we do twice a year or so, we spend a good deal of time at the farms with our own children. Our children love to swing in the hay barn, search for kittens in the shed and outbuildings, 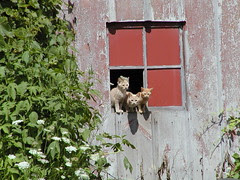 and ride the 4-wheeler. 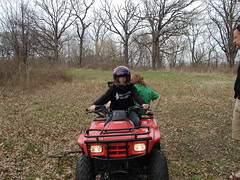 They have played in the rows of corn, fed the steer 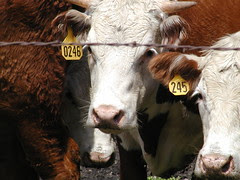 (and know the difference between a cow and a steer), and walked through the area called simply "the woods". 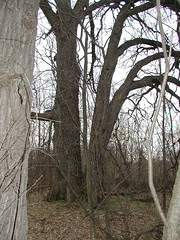 They have even helped bale hay 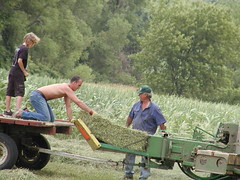 and ridden on the hay wagon. During our most recent visit our teenaged children practiced driving our automobile around the farm buildings and through the empty corn and soybean fields. 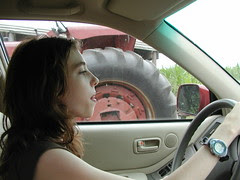 While none of these farms are owned by Dean's family; they have always rented the land and buildings, the farms have always been there for us. We really don't need to have many plans when we visit our families. We can always find lots to do at the farms, especially in the spring and summer. But in the winter too. We all have happy memories of riding on a sled behind a snowmobile after a decent snowfall. One winter we invited my brother and his young family for our own private hay ride through the snow-covered, winter-dead fields.

These farms are as much a part of our lives as are our flesh and blood relatives. We've gotten to know where to look for new kittens each summer. We know the feeling of prickly hay on perspiring skin when visiting with the twins during hay baling time. We know the taste of sweet corn cooked moments after being picked from the corn stalk. We know, and kind of like, the many smells the steer make. We know the sounds of the farm too, the creaking of the rafter where the swinging rope is tied as we try to swing as far as we can.

It looks like we are going to have to rely only on memories before too long. Our days being able to visit the farms are numbered.

A few weeks ago we received an email from Dean's sister who lives in Orlando, Florida. She'd received it from a friend:

I just had to tell you about a meeting I had today with a marketing rep from one of our companies. This is a company that specializes in work for municipalities and the rep was telling me that they have been working with Pingree Grove because it is about to change from a town with a population of 75 to a town with a population of 25,000. Did you know? Already banks, Walgreens and other commercial vendors have committed to locate in the development of the town of Pingree Grove. He told me that they would eventually have 20 parks and 6 baseball fields. It's incredible! Urban sprawl has reached "grandma's house." He was surprised that I had ever heard of the place. Things are really going to change.

That email elicited this response from Carol, Dean's sister-in-law who lives on the Plank Road farm:

A front page article in the Elgin Courier this morning talked about 576 acres on Plank Rd and Rte 20 to be developed. That's us! It sounds
incredible. I'll have to send you the article. Shops, restaurants, $16.00 glass of chardonnay and more. Danny said I guess I'd better pack
my bags.

I didn't wait for Carol to send me the Elgin Courier News article, I found it online and was heartbroken. According to the article by Nathanial Zimmer, "...a 576-acre chunk of farmland at Plank Road and U.S. 20..." could become a high-density, mixed-use project that would put restaurants, retailers, office buildings, condominiums, townhomes and detached single-family homes..." The article also claimed that the model for the plan is a development called "The Glen" which is an upscale planned-commuintiy in Glenview, Illinois with offices, amenities and homes within walking distance of each other. Elgin's Mayor, Ed Schock, was quoted as saying, "We have an opportunity to come up with something really special". Elgin's main planner, Tom Armstrong is quoted in the article as well. He said, "I think [the land owners should] be commended for [taking an interest in the ideas espoused by New Urbanist land-planners, who seek to limit sprawl and reduce traffic congestion by creating walkable communities that place homes, workplaces and stores in close proximity]".

Another article, this time in the Daily Herald, quotes Jerry Deering, the city's director of community development, as saying, "It's unlike anything Elgin or the entire metropolitan area has ever seen, with its sheer size, density and sustainable transportation synergy". The Herald article also names the architectural and landscape design firm based in Geneva, Illinois, that is planning on doing the development as well as the owners of the property.

It is obvious that Elgin is excited about this development. Perhaps I would also be excited about the project if I didn't know the families on the farms. After my son's initial shock when I told him about the development he called me a hypocrite. He meant that at one time the house in which we live was an orchard, and before that probably simply wilderness. While that may be true, I'm not a hypocrite for that reason. People have to live somewhere, and our house was here before any of us were born. I am a hypocrite because I didn't begin to be digsusted by urban sprawl, dwindling family farms, or developments along country roads until it hit close to home. Not home as in the nearby sense, we moved away from Elgin a quarter-century ago, but home in the "home is where the heart is" sense.

I also imagine that if I owned the properties I'd be selling them too, considering the rate farmland in the area is going for these days. I'm not faulting anyone, really. Just sad about the personal loss. If city planners get their way, no one I know would be able to afford a house, condo or even a glass of wine in the new development.

The development of Pingree Grove is also a sore spot. Each Christmas eve for the past 20something years of my life has been spent at the Luthern Church in Pingree Grove. Dean's grandparents lived there and his grandfather owned a lumber company there. Dean's parents and older siblings lived in a house in Pingree Grove for a while and Dean's mother still owns the house.

I wonder how many Elginites will drive down Plank Road or Route 20 in a few years and feel sad about the farms that used to be there. Perhaps a former Marylander will drive by "Elgin West" and remember growing up near Kings Farm and feeling sad that another farm has been turned into a housing development.

I'm working on creating a blog that documents the developments. This is not to try to stop anything, that cannot be done, but to document farmland that once grew corn and soybeans as it turns into a housing development that will sprout houses, offices, cafes and shops. I'll take photos during my visits to Elgin, link to and quote articles in papers and perhaps interview people close to the action as the development progresses.
Posted by Cedar Waxwing on Tuesday, April 18, 2006 2 comments: