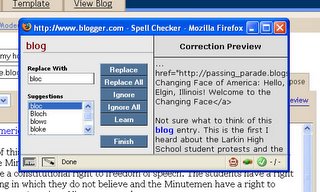 I thought this was funny. After writing an entry today using the Blogger interface I did a spell check. The word "blog" was highlighted as misspelled.

Isn't that kind of funny? You'd think the Blogger folks would have added that to the dictionary.

That is not as bad as the program w.bloggar where anything capitalized ends up getting flagged as a spelling error. The days of the week, months of the year, names of countries and cities are all counted incorrect. 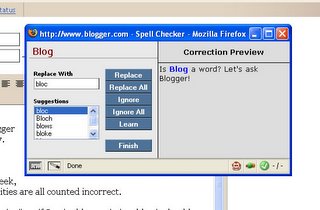 Luckily Blogger's spelling tool allows for "learning", so if I write blog again in a blog after clicking the "learn" button, the word blog should not be highlighted.

We will see... Hmmmmm 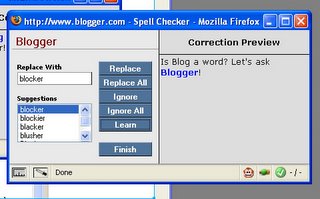 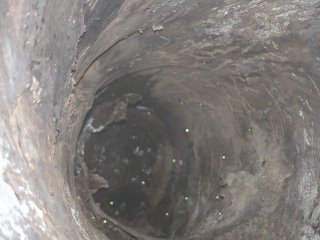 On a small trail near the C & O Canal in Glen Echo, Maryland is a Sycamore that has somehow been hollowed out, yet remains alive. There is room for several people to stand upright in this tree.

My husband, at the request of our daughter, took a photograph up inside the tree trunk. The photo here is what I saw when I looked at the photo on the computer.

About a dozen small colorful orbs seem to be dancing in the hollow trunk of the tree.

After seeing the tree my daughter wondered aloud what creatures lived in that tree. I guess we found out.

Posted by Cedar Waxwing on Sunday, November 13, 2005 No comments:

Elgin
or Why F. Scott Fitzgerald was mistaken

Perhaps because I am now of an age where I have more of a past than a future, I have been examining my past self, places I've lived and people I've known. Perhaps it is only because I have been reviewing old family movies and it is simply nostalgia for what once was. Most likely, it is because I've been given the opportunity of seeing my hometown through the eyes of others.

My hometown, Elgin, Illinois, has been a source of slight discomfort for me for the past several decades. I've very recently discovered that, while it really doesn't much resemble my hometown anymore, I no longer feel the urge to mumble the name when telling others where I grew up.

Until I went to a close-by but out-of-town university, Elgin was simply my hometown. I was born at Sherman Hospital the first year Elgin was considered an All American City. My family was a typical working class family of the time. My dad first repaired cars, then appliances. My mom stayed home until my brother was at least in junior high school and I was in college.

I even had a sense of pride in Elgin because I could trace my ancestry through my maternal grandfather to the early years of Elgin. His mother was a Tyler, a family whose name was given to a local creek and park. Other ancestors of my grandfather built a church on Highland Avenue, west of town and gave their name to a country road there.

When I went to college, however, I discovered that the name Elgin usually elicited the response, "state hospital"? It had not occurred to me that our local mental health facility would be what made Elgin known to others. I assumed people would remember the Elgin watches, not the insane asylum.

In 1979, when I graduated from NIU with a teaching degree, Elgin's school district, U-46 was considered a prime place to land a teaching job. At the time, I remember the professors saying it was second only to Schaumburg in terms of desirable places to teach. I applied to U-46 when I graduated, but was told to get some experience elsewhere and try again.

I met my future husband in 1979 and we moved to Pennsylvania in 1982. That far away from Elgin, we had to tell people we were from a town about 35 miles west of Chicago before they understood where we were from. At least people didn't wonder if we had spent time in a madhouse.

Since our move from the area, the school system declined, farmland has been destroyed for more and more housing, and riverboat gambling became a reality.

I cannot find data regarding school performance before 1999, but since then district U-46 has not done well on standardized tests. I'm a product of the U-46 schools and while my education might have been lacking in a few things, I think they did a decent enough job educating me. Because I have nieces and nephews who are school aged and live or lived in Elgin, I've been forced to become aware of the school situation in Elgin. My sister-in-law, who grew up in Batavia, disliked U-46 so much she spent more than she earned on private schools for her children when she lived in town.

Each visit to Elgin saddens us with more housing and less farmland. I grew up on the west side of Elgin and remember when it was the edge of the city. We even had well water for a few years of my childhood. Now the west side of Elgin extends about two miles west of my childhood home. My husband's brothers are all farmers in the area and my husband grew up on a farm that will soon be demolished and turned into a subdivision.

In the early 1990s when Elgin considered riverboat gambling. I remember being dismayed at the idea of gambling in my hometown, and prophesied Elgin would become a modern-day Sodom and Gomorrah if it went through. Proponents of the gambling boat claimed Elgin would see income from profits from the boat and in 1993 the idea became a reality and the boat was built and opened in 1994. Not long before that an episode of the television program, The Simpsons, enacted my worst fears when the hometown of the Simpsons, the fictionalized Springfield, opens a riverboat casino and the town becomes a virtual Pottersville.

So, as you see, until recently I've been disappointed in Elgin and embarrassed to call it my birthplace. It was not living up to my childhood expectations. It was going through swift changes and making me more and more uncomfortable with each subsequent visit. I also felt as if I had outgrown Elgin. After all, I lived near Washington, DC and was well-versed in computers, website design, blogs, chatrooms and bulletin boards and few years ago when I suggested to a class reunion chairperson that a website (freely made by me) or email list would be a valuable contribution to the class of 1975's 25threunion plans I was told that no one used email or the Internet. That did it. I put Elgin at the back of my mind except for the dreaded visits back home for Christmas and occasional summer vacations.

A few weeks ago I looked up Elgin in the Wikipedia and found, to my surprise, an entry. That entry led me to flickr photos of Elgin, which led me to a blog which led me to several other blogs. In the few years since my high school reunion, Elgin had come online and out of the 20th Century. After being amazed and in awe about this miracle, I began to realize that not only was this a good opportunity to know what was going on in Elgin, it also gave me a chance to see Elgin through the eyes of others.


"It is invariably saddening to look through new eyes at things upon which you have expended your own powers of adjustment."

This new awareness does not alter the fact that the farmland is swiftly being replaced by tract housing. Could it be for the better? Is it making the Elgin area a better place? Maybe, but it still is depressing. It reminds me of when my husband and I lived in Pittsburgh and an old bar was remodeled into an upscale drinking and dining establishment. Because we were newcomers, it made little difference to us, but I vividly remember passing an older gentleman whom I had often seen drinking at the bar before the remodel as he left the bar the night of its grand re-opening. He looked incredibly sad and mumbled something under his breath about "damn yuppies" and I never saw him at the bar again. As I look upon the thousands of homes being built on former corn fields, I think "damn newcomers".

While I am still not sold on the idea of riverboat gambling in Elgin, and believe Elgin could become like Atlantic City with glitz and glitter less than a block away from abject poverty, I am willing to open my mind to hearing positive stories about the profits from the endeavor. Besides, it's almost fun watch late night cable in Bethesda, Maryland and see the Grand Victoria Casino in Elgin advertised on the Discovery Health channel.

Not long ago when I was asked where I was originally from, the person making the query then remarked that he had been to Elgin. He didn't say anything about the state hospital, nor did he mention watches. He had gone there to gamble.