Cedar Waxwings in my Yard 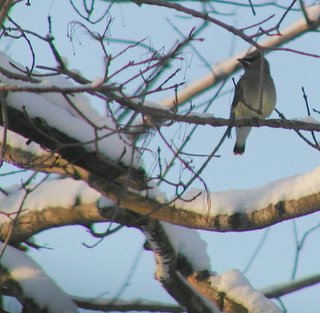 I've been sick since Friday. My son brought home a case of croup and I caught it from him. I hate to be sick, especially during the holiday season where I have so many things to do.

Last night it snowed here in Bethesda. Not a lot, but enough to settle on the branches of the trees and cover rooftops and grassy areas with a couple of inches of white powder. I'm not a big fan of snow, but I like looking out the window at it the morning after a snowfall. 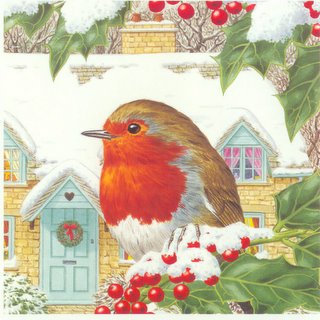 This morning, while drinking my cup of coffee, I sat looking out the side window of my living room. I saw a lot of action in the bushes and noticed many robins flying around, and settling on branches. It's not often I see robins in the snow, even though I know some winter here. One robin sat on a very snowy branch, with his head turned and looked exactly like the English robin featured on a Christmas card I received yesterday from a British friend. I thought about getting my camera, but didn't want to take a photo through the window and was feeling too sick to actually get dressed and go outside to take a picture of a bird that by then would have flown away.

I then suspected that with all of the robin activity, I might be lucky and see a flock of cedar waxwings as well. I often do see them when the robins come through after cold weather sets in. They both like eating the holly berries on the trees in the neighborhood. We only have two, but our neighbors have several.

So, I went to each window and searched the branches for more bird activity. I was rewarded at the second window when I saw a solitary cedar waxwing sitting in a tree that grows in the grassy area between the sidewalk and the street. (I grew up calling it a "tree bank", but I've gotten such funny looks when I call it that, I don't call it anything).

I did get the camera and took several shots of the waxwing through the window, none of which came out very well. Later I think I saw several cedar waxwings in the trees in the back yard and thought about getting dressed and trying to get better shots, but didn't do it and the flock few to a different yard. 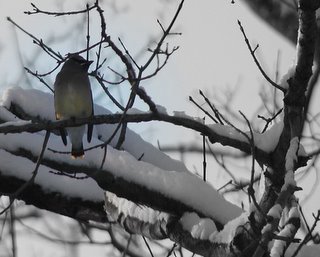 It is such a treat to see these birds. They are obviously my favorite bird, given that I am "Cedar Waxing" in most of my online travels. I love their sleek look, their unique markings from the eye markings that look like pointy sunglasses to the bright red tips of their wings that give them the name "waxwing" (it looks like their wings have been dipped in wax) to the bright yellow line on the tips of their tails. I love their gregarious nature. From what I know about them, they always travel in flocks. I even heard that waxwings will sometimes sit in a row on a branch and pass a berry or petal from one to another down the line until everyone is fed.

The sighting didn't make me better, but it gave me the energy to think about feeling better. And that counts for something.
Posted by Cedar Waxwing on Tuesday, December 06, 2005 3 comments: